Okay, admittedly, the wheel and fire were not invented by the Italians. And neither did the penicillin or the iPhone come from Italy. But other than that, these inventive people are good for great inventions and historic breakthroughs. We’ll let a few important examples pass in review. Separately, below we elaborate two more separate famous Italian inventions that did not substantially change life, but did make it more beautiful.

The Banca Monte dei Paschi di Siena was founded in 1472, making it the oldest surviving bank in the world. Siena was an economic-financial superpower at the time. The bankers of Siena had their representatives all over the world and were the first to use the bill of exchange, a kind of check whereby the payee was paid upon presentation of the security. Thus, modern money is in fact an Italian invention.

The Monte di Pietà, which can be translated as a ‘mountain of compassion’ was a fund that gave loans at low interest rates. You could call it the first form of microcredit. The Monte di Pietà was an invention of Franciscan Friars Minor to combat poverty.

The first ‘Monte’ was established in Perugia (1462) but went under in the early sixteenth century. The Monte of Siena, on the other hand, survived time after time, even if it always made a hair’s breadth difference. In 1622, for example, the bank almost went under when the treasurer ran off with the cash – yes, that happened even then. As a result of the 2008 banking crisis, the bank is in dire straits.

In every bar, you’ll see a pink-colored newspaper next to the local paper. This is La Gazzetta dello Sport, the second largest newspaper in Italy after Corriere della Sera and La Repubblica. This daily newspaper, which is entirely devoted to sports, has an average circulation of about 200,000 copies.

Specifically in May, the pink newspaper still has a slightly higher circulation because then the ‘circus’ of the Giro d’Italia winds its way through the country.

This cycling race was born in 1909 from the mind of the then editor-in-chief. But the newspaper came into being as early as 1896 as a result of a merger between Ciclista and La Tripletta. This makes La Gazzetta the oldest surviving sports newspaper in the world.

To make the newspaper stand out more in the newsstand, La Gazzetta has been printed on pink paper since 1899. This also explains the color of the leader’s jersey in the Giro d’Italia. This cycling race was announced on 7 August 1908 over the width of seven columns in La Gazzetta and had to offer an answer to the competing newspaper Corriere della Sera, which already organized a popular car race through Italy. At its peak, in 1983, La Gazzetta could count on a daily readership of no less than 3,078,000 sports fans. In the internet age, the editors can only dream of that, Giro or no Giro.

> Also read about Italian brands, another category of Italian icons.

The telephone is, of course, one of the most important and famous Italian inventions. Italians are devoted to the thing. The telephone density in Italy is understandably very high.

But wasn’t Graham Bell the inventor of the telephone?

Let us go back to 1854. Antonio Meucci, an Italian immigrant to the United States, developes the first prototype of the telephone. He uses it to communicate with his wife, who is bedridden. Meucci is too poor to apply for a patent. In 1871, he moves to New York and files his invention in a ‘provisional’ patent to be renewed annually for ten dollars. In 1873, Meucci can no longer come up with that amount.

The description of the invention probably came into the possession of Graham Bell, who patented it in his name in 1876. All’s well that ends well: in 2002 the Congress of the United States attributed the invention of the telephone to Meucci after all.

In the controversy over who invented the radio, an Italian also plays the leading role.

Around 1900, a battle raged among various scientists in Europe and the United States over the upcoming invention. Guglielmo Marconi (1874-1937) emerged victorious, even though he filed the crucial patents in 1904, a few years after his Serbian rival Nikola Tesla did. The case went to trial but Tesla was not awarded the patent.

Nevertheless, the U.S. Supreme Court invalidated Marconi’s first patents. The fact remains that Marconi was the first to make a radio connection of several kilometers with a homemade transmitter and receiver. In 1909, he won the Nobel Prize in physics.

Another kind of Italian inventions, are more obvious, and represents a clear tradition of the attention to and versatility of enogastronomy in Italian culture. We will limit ourselves now to two such Italian inventions:

To start with, ice cream was not invented in Italy (more on the history of ice cream you get in the Gelato Museum).

Wait a minute, these days ice cream is indeed synonymous with Italy. Plus: Italy is where the first machine-made ice cream started. So we have good cards.

From all over the world, aspiring ice cream makers now travel to Bologna to become proficient in the noble art of ice cream making at the Gelato University. Italian ice cream makers spread across more than 39,000 gelateries and bars and pastry shops with homemade ice cream.

The secret behind that delicious Italian ice cream is that it contains little or no preservative fats and artificial flavorings. Moreover, fresh fruit is used in the production as much as possible. The Gelatiere turn and knead at a temperature of 31 degrees below zero in less than ten minutes such a colorful bowl of ice cream together that every tourist knows from his or her favorite Gelateria.

We are in the year 1154. The Arab writer Al-Idrisi is at the court of the Sicilian king Rogier II and writes:

In Trabia is located a plain with large farms where people make a lot of pasta to export in all kinds of parts of Calabria and other countries of Muslims and Christians, where they send a lot of full ships.

This is the first time that ‘pasta’ appears in a written source. The Italian origin of the dish -Trabia is a town near Palermo- is thus proven (although one can argue that a type of pasta was already known to the Chinese 5000 years ago).

Italy is pasta country. Durum wheat, the hard variety, is definitely the number one crop here. Durum wheat is longer and the chaff coarser compared to ‘soft’ wheat, which is the basic ingredient for bread.

In Italy, five main groups are distinguished: long pasta (such as spaghetti), short (maccheroni), brodo (for use in broth), multiform (farfalle, in butterfly form) and the nest pasta (tagliatelle). Within these groups the variety is countless. Of spaghetti alone there are dozens of types, which have different names depending on their thickness, such as capellini (hair, very thin), bucatini (holes, because hollow) and fettuccine (ribbons). There are also numerous famous sauces, such as bolognese (ragù) and carbonara (bacon, pecorino cheese, egg). The pasta sauce amatriciana (tomato and cheek bacon) is named after Amatrice in the Apennines.

Perhaps Italy’s best known pasta brand is Barilla. For years they had the excellent slogan “Where Barilla is, home is”. The commercials (in the 1980s and 1990s) are in line with it:

Finally, a few questions and answers about famous Italian inventions, as a sort of summary of this article:

What’s the oldest bank in the world? 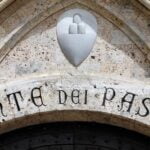 The Banca Monte dei Paschi di Siena was founded in 1472, making it the oldest surviving bank in the world. Siena was an economic-financial superpower at the time.

Who invented the telephone?

Who is the inventor of the radio?

Nicola Tesla from (present-day) Serbia. But the fact remains that Marconi from Italy was the first to make a radio connection of several kilometers with a homemade transmitter and receiver.

Where does pasta comes from?

The first time that ‘pasta’ appears in a written source was in the year 1154. The Italian origin of the ‘dish’ is herewith proven. One can argue however that a type of pasta was already known to the Chinese 5000 years ago.

What Italian inventions changed the world?

Among the Italian inventions are: the banking system, the (sports) newspaper, the telephone and (with good will) the radio.

Italian movies on Netflix and Amazon: 24 best recommendations in 2022