The 7 hills of Rome are in reality double that number. You can visit all the hills on which the city is built. Most of them offer fantastic views.

Rome is built on 14 hills

If you believe the sayings about Rome, the city was built in a day and all roads lead to it. Well, I think Highway 1 runs between San Francisco and Los Angeles.

It is also said that Rome was founded on seven hills. But wait a minute, there is something to that. Ancient Rome actually stretched over seven bumps within the city walls.

The 7 hills of Rome, listed alphabetically:

In later times, the city expanded over even more hills. Contemporary Rome is built on at least 14 hills. Join me in this article and I’ll show you the best ones. You don’t need to bring mountain boots, climbing gear and sickles. The monti (mountains) or colli (hills), as we call them in Italian, can also be reached with sneakers and a bus ticket (or other transport).

It does take some planning if you want to visit them all. The seven historical hills are located in the city centre, at little distance from each other. Outside the historical centre, the following hills can be ‘climbed’ in a clockwise direction:

Status quo at the Quirinal

Romulus prepared a solemn feast and had it announced to his neighbours. The entire population of the Sabines also appeared, with women and children. At a signal, the young Romans ran in all directions to rob the girls.

This is how Livius describes the ‘The Rape of the Sabine women’, a key scene in Rome’s early history. That feast and that raid, well, all that would have taken place here on the Quirinal. By now, the empty wine bottles and traces of the kidnapping have been cleared away.

Nowadays a palace dominates the hill. Once built for the pope, it was then the residence of the king and since 1946 the president lives and works in the building. He is not alone. Some 1100 people work there, including 45 drivers, 11 cooks and 59 craftsmen, but of course, in such an old palace a light bulb sometimes fails. The Quirinal’s budget is four times higher than that of the Queen of England.

This number of staff does not include the soldiers who solemnly play the national anthem every sunday at 6 pm (4 pm in the winter).

The Quirinal Square has beautiful statues of horses held at the reins by Castor and Pollux also called the dioscuri. If the inscription on the base is to be believed, the statues were made by the Greek artists Phidias and Praxiteles. We are talking about the Michelangelo’s of the fifth and fourth centuries before Christ. Yep, that’s 2500 years ago.

The spacious square is -except for a few police cars- car-free and at the top of the stairs a splendid view awaits you in the diorama that Rome is. From here downwards it is -with the help of gravitational force- a few minutes. And then you will stand in front of the Trevi Fountain.

The Caelian stands on a slope

The Caelian Hill is one of Rome’s lesser-known bumps. It is next to the Colosseum, but somehow Romans only drive their cars past the Navicella fountain, which is on Caelius’ highest point. Some visit the nice park, called Celimontana, where in summer a jazz festival is held.

Of course, on the hill there are some churches, some very interesting and even old ones, like the circular Santo Stefano and the church of Saint John and Paul. Underneath this church, interesting excavations have been made of houses from the time of the Roman Empire. Next to the church a cobblestone road heads downhill. If you think away the cars, it is like going back 2000 years in time. The street has even been labelled the same for two millennia: Clivo di Scauro (the ‘slope of Scaurus’, named after a magistrate from around 100 BC).

Blazing guns from the Janiculum

Bang! Every day at noon a cannon shot is fired from the Janiculum. A centuries-old tradition for sacristans to synchronise bells. It still works today. It a perfect occasion to synchronise your watch. Be sure to bring your earplugs.

The hill has something to do with blazing guns and canons. In the 19th century, freedom fighters fought here in the hope of taking the city. Their commander now towers above the hill in bronze and on horseback. His name is Garibaldi, who has never heard of him? (a lot of people outside Italy, I would imagine.)

The Janiculum, possibly named after the god Janus, is the highest hill in the city centre. More of a mountain actually. If you drive up from the Vatican side, you first have to go through a few hairpin bends as if you were in the Dolomite Mountains. The view is spettacolare.

From the Angel’s Castle in the north-west to Saint John’s in the south-east, you cannot dream of a better panorama. On clear days, you can easily see the Alban hills (30 kilometres away) and the Appenines, which are often covered in snow in winter. The most unobstructed view is from the lighthouse, about 200 metres from the Garibaldi equestrian statue. There you can also see the dome of the Pantheon.

At this spot, women used to come to call their husbands who were in the prison thats stands at the foot of the hill. Visiting hours were a bit tight, shall we say. Very occasionally, you can still see such women shouting at their loved ones. But no fear. Nobody has escaped from Regina Coeli prison yet.

Important scenes from the film ‘The Great Beauty’ (2013) were shot on the Janiculum. Read more about it in this article and watch the trailer.

The bells of the Esquiline

Peace and quiet, no, you will not find it on the Esquiline. Once upon a time, only the Santa Maria Maggiore, so called because it is considered the most important Marian church in the world, stood on the hill. The campanile, the bell tower, rang every evening at nine o’clock like a GPS before the word was coined, This helped those who got lost find their way back to the city.

The tradition still continues, but the bells have gained competition from horns. The traffic thunders past the church and the nineteenth century palaces that have joined the church. Add to that the high concentration of coaches and the busy central station around the corner, with all its chaos and problems, and you’ll understand that the reading of the decibometers spikes out.

But nonetheless, climb the Esquiline! The ‘Maggiore Church’ has, for example, beautiful mosaics but also the simple tomb of Gian Lorenzo Bernini, the greatest Baroque artist. Fans of mosaics should definitely visit the little church of Santa Prassede, which is located on a back street.

On the hill something else is also pointing upwards. It’s the ancient column from the Basilica of Maxentius. Nowadays, the column is topped by a ‘Virgin and Child’ statue.

Peepshow at the Aventine

The Aventine, with its serene churches and the tranquillity of a park with orange trees, does not make you think of a peep show. Yet every year, tens of thousands of people flock to the gate of the Maltese Order with the sole purpose of peeking through the keyhole. Fair’s fair, that vista is (also) quite nice. What you see, you will notice when you get there. I am not your spoiler man.

The square behind all those curved backs in front of the keyhole is also quite special. It is one of the few executed plans by the engraver Piranesi in his imaginative style in which pyramids, garlands and Maltese crosses play the leading role.

Two carabinieri in their dark blue service car stand in the square day and night. They say that they are relieved at the end of the day, or night. They are not monitoring the peep show, but an embassy located on the square.

A beautiful view of Rome that does not require you to bend down, possibly take off your glasses and sometimes stand in line, is in the park with the orange trees. That is a hundred metres further on. Here you have a good view of some of the 7 hills of Rome, such as the Janiculum Hill and the Capitol Hill. The park is equipped with some marble benches where you can eat a sandwich. As in the whole of spring-rich Rome, you will find little fountains with running water. But don’t drink too much. The public toilet in the park will make you nauseous.

Broken noses on the Pincio

A total of 228 busts brighten up the Pincio park hill. They are mainly the heads of – by now forgotten – heroes of the nineteenth century. Regularly a nose, an ear or another part of the body is broken and the municipal restoration service comes in white coats and a tub of stucco.

The park is also full of pine trees and cypresses and since 1873 there has been a water clock. The water bell was broken for a long time, but was restored in 2007. The view from the terrace that is named after Napoleon is not bad at all: Piazza del Popolo at your feet and the Vatican in the distance.

If you want to enjoy yourself a bit longer around dinner time, stroll to the Casina Valadier restaurant, named after the architect who designed Popolo Square. For a digestivo, useful for digestion and to settle the bill, a walk to Villa Borghese is a good idea. A footbridge connects Rome’s most famous park to the Pincio of the broken noses.

The 7 hills of Rome in short

This concludes our tour over some of the 7 hills of Rome, or rather 14 hills of Rome. Below is a brief summary of a few points from this article that I usually discuss in the form of questions and answers.

What are the 7 hills of Rome? 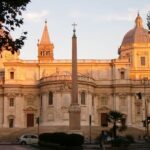 Which of the 7 hills of Rome offers the most beautiful view? 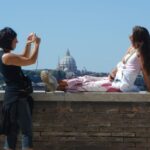 The most beautiful and complete view is from the Gianicolo. The Aventine is a close second. On the Capitol you have a wonderful view over the Roman forum.

Are all 7 hills of Rome to be visited?

All can be visited. The Palatine is part of the park of the Colosseum. For access to this hill you must be in possession of a ‘Colosseum’ ticket.

Villa Ludovisi auction: a peek into the expensive Rome villa

Christmas in Rome: 11 things to do and places to go

Rome off the beaten path – Rome by tram